Have a custom idea? Give us a call

A great fit for every locker room 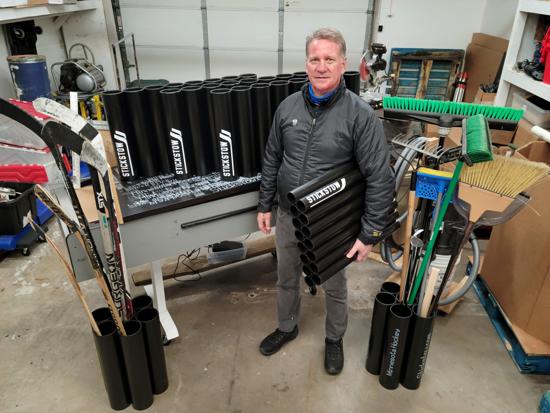 Jim Seabloom is a youth hockey coach who invented and built the Stickstow, a stick organizer to keep sticks out of the way and in an orderly spot in locker rooms and garages.

"We are really happy with Stickstow, it's a nice clean look and the users have been very appreciative. We currently have Stickstow systems outside the locker room doors and will soon have them in our players boxes as well." - Kevin Elm, Roseville Arena 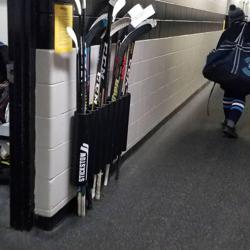 Stickhandling is one of the most important aspects of the game of hockey. And Jim Seabloom might have taken it to a new level.

No, he can't dangle through 30 stationary pucks like Patrick Kane, or toe drag like Mitch Marner, but make no mistake, Jim Seabloom can handle sticks.

Seabloom is the inventor and manufacturer of Stickstow, a stick organizing mechanism that allows teams to neatly organize their sticks on the bench, in the locker room, at home, or in the shop

In 2019 Seabloom was coaching his son's peewee team and like so many coaches were trying to keep the locker room organized and secure.

"Obviously hockey sticks were lying everywhere," he said. "So, after picking up hockey sticks over and over again I thought there must be a better way."

Seabloom researched the market for anything he could purchase that he could travel with. He couldn't find what he was looking for.

"So I decided to build my own," he said. "I talked to our head coach John Olander and he made a few suggestions such as 'don't make one out of a garbage can. We wanted something the coach could carry that was lightweight and didn't hold garbage."

Seabloom grew up in St. Paul has been self-employed since age 14 when he had his first business. Today he owns and operates an online business in Roseville.

He grew up playing hockey on the backyard ponds in Mounds View. Because his family moved around a lot, he played in several city leagues throughout his youth. He continued to play recreationally in men's leagues.

"Today I still skate and play pick up games at the (Roseville) Oval or at the arena," he said. "More importantly I assist with my son's peewee team in Roseville. I have met so many great people through hockey. For me, any opportunity to participate in hockey is rewarding."

Now he is helping the hockey community through his stick handling expertise. The Stickstow is made of tough plastic pipes cut to various diameter and lengths with a smooth beveled finish on the ends. The pipes are bonded together to create an orderly stick organizer. This allows sticks to stay in one spot and are easy to recognize by players because there held upside down with the blades showing. There is additional engineering involved for arenas who require permanent installation. The mobile model can be easily supported by a puck bag. Some models hold up to 25 sticks.

How many times have kids or coaches tripped over sticks laying all over in the locker room? What happens when a player steps on a stick blade and it ruins his edge right before heading out for the third period? Coaches giving between-period speeches shouldn't have to worry about getting tripped up while they focus on their game plan. While tripping is still a part of the game, it doesn't have to happen in the locker room.

"We are really happy with Stickstow, it's a nice clean look and the users have been very appreciative," said Kevin Elm, superintendent at Roseville Skating Center. "We currently have Stickstow systems outside the locker room doors and will soon have them in our players boxes as well. Also, Jim, is great to work with!"

The product is only a year in the making and Seabloom said he hopes to get his product into more arenas in Minnesota and beyond.

"The future looks bright for Stickstow," he said. "Last year's Let's Play Hockey Expo was a pivotal event. I heard from the hockey community and was inspired and encouraged by so many people."

Seabloom may not be making moves like Kane and Marner in the NHL, but his stick handling skills are still top notch.

For more information about Stickstow or to purchase one of several models, visit www.stickstow.com. For a customized model, call Jim at 651-998-9397. 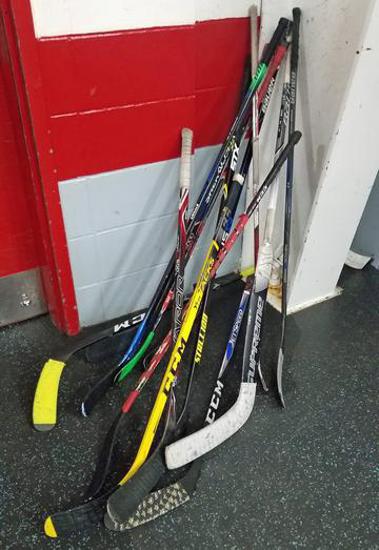 Sticks not only create a mess in the locker room and on the bench, but they also create a tripping hazard.

The Stickstow organizes sticks to keep them out of the way yet easily accessible.